Endure Aggro is a powerful deck with a unique playstyle that isn’t popular on the ladder. It combines a synergistic and explosive early game with a massive and satisfying finisher. This guide will explain the deck on a conceptual level and prepare you to use it with resounding success on the ladder.

I started playing Runeterra in mid December 2020 and Endure Aggro was one of the first decks I crafted. I used Endure Aggro during my pushes from plat 1 to diamond 4 and from diamond 1 to masters, so I’ve used the deck a lot and seen success with it at mid level, even though I’m a newer player to the game as a whole.

What is Endure Aggro and why should I play it?

Endure Aggro takes advantage of SI’s “kill your own units” package (Ravenous Butcher, Cursed Keeper, Barkbeast, etc.) to set up extremely powerful openings while They Who Endure, a Freljord 7-drop, makes for a potent finisher. They Who Endure is a 1/1 overwhelm unit that gains +1/+1 for every friendly unit that has died, meaning that the droves of friendly units that you led to their deaths in the early and mid games can lead to a very high power overwhelm attack (or Atrocity) to finish opponents off in the late game.

Here are its advantages:

Here is its most awful weakness:

A closer look at the deck 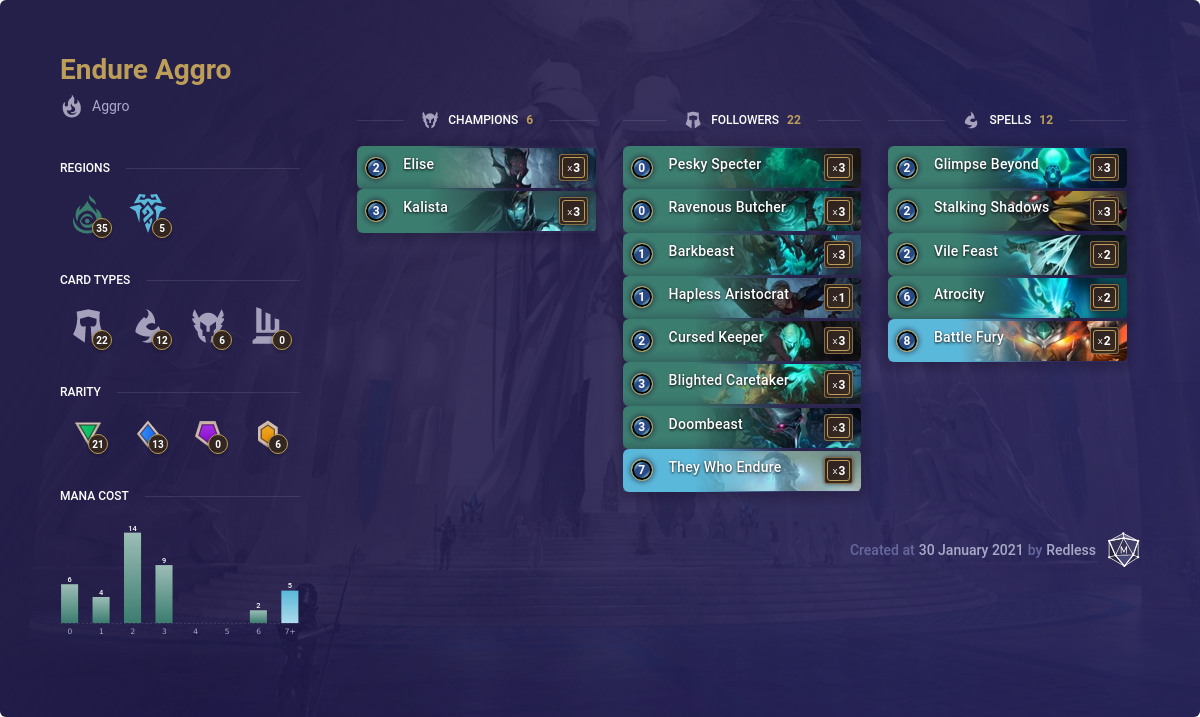 I took this decklist from Swim’s website, but it’s not the current version of Endure Aggro that he’s featuring, and I think this version is better than that one.

How do I win games with the deck?

There are two primary strategies for winning with the deck. Try for a busted opener, but you may have to play more defensively for the combo depending on your hand.

Plan A: Nut draw and blow them out turns 1-2

These days a lot of decks don’t run well-statted one and two drops. But Endure Aggro runs the most explosive 1 and 2 drops in the game, so you can sneak in a massive board advantage and do loads of nexus damage before your opponent can respond. Specifically, these four units will allow you to explode on most decks if you can draw the right combination of them.

The openings you should be aiming for are:

You should mulligan aggressively for the first four of these openings. Besides these cards, you should also be looking out for Elise, since she’s the best two drop that doesn’t require a two-card combo (I usually keep Elise unless I already have something nuts to do on turn 2). You should not be hesitant to develop instead of open attacking on turns 2 and 3, since your developments on those turns will usually be much stronger than your opponent’s.

After you’ve done one of these openings, if you don’t kill them all the way just by using the wideness of your board to force damage, you have a few ways to finish things off. You can drop Kalista, level her, and grind your opponent out on the board (but sometimes she’s better used as just another body in a wide board). You can drop Blighted Caretaker which will widen your board by two at least and challenge two opposing blockers, letting you shove damage more effectively. Or you can, on turns 5-6, (open) attack with a wide board and Battle Rage (+8/+4) whoever they don’t block to effectively force 8 more burn. If that doesn’t win you the game, you can chip them out with Doombeasts or procede to plan B.

Plan B: Chump block a ton and win with They Who Endure

The other thing that this deck has is tons of small bodies (called “chump blockers”) to keep your nexus safe. Your 1-2 drops as mentioned above can contest most aggro decks by blocking in the early game and thus freezing out most hyper aggro openers. This also works in the later game vs most decks that don’t have elusive or overwhelm to get around them, meaning that as long as you don’t care that you’re slowly losing card advantage you can keep your nexus very safe. Because this strategy can drastically slow down the rate at which you lose nexus health while also killing off tons of your own units, you can play They Who Endure after stalling this way and then close the game with it (and Atrocity if needed).

Glimpse Beyond can be used to dodge combo centric win conditions like Fiora and Lee Sin if you kill off the ally that they’re challenging. This is useful when it’s time to stall.

Stalking Shadows is the only burst speed spell in the deck, and it’s also one of the only spells in the deck, period. As such, you should often save it to combo-enable Doombeast, which can otherwise get stranded. Ignore this as needed.

If you have 4 units, you can get full value off of Blighted Caretaker by killing a minion that won’t summon another (so not Cursed Keeper or Hapless Aristocrat). If you have 3 units you can kill a Keeper or Aristocrat instead, filling your board. Sometimes you should break your Keeper open even if you have 4 units, but you should be thinking ahead if you plan to play Caretaker so that you aren’t put in this position if you don’t want to be.

It’s right to attack with Kalista and Barkbeast last in line, since they can increase their power if things die. This is important for the Specter -> Barkbeast opener.

13 mana is how much you need to play They Who Endure and Atrocity in one turn, and it’s also how much you can have on turn 10 and after if you bank 3 spell mana.

I hope you learned something from this guide. I’ve had a lot of fun with this deck as it’s carried me up the ladder, and this is also something I wish for you.

Let’s look at some of the worst cards in the deck and the best cards not in the deck. Can they be exchanged for one another to improve the deck? I don’t think so, and here’s why.

I run two Vile Feast because the card is very good at beating Zoe and Teemo, and can also remove a Valor or Miss Fortune (the latter with some help from Blighted Caretaker). This deck benefits a lot from having spells since it has so few way to spend its spell mana in many cases. Also, if you’re “hardcore” and you don’t draw glimpse, Butcher, or Caretaker, you can use this to slaughter your own Cursed Keeper.

Notably I run Vile Feast instead of Unspeakable Horror because this deck is already pretty bad at enabling nightfall. If a card is mostly used for early game tempo swings or removing a small unit that’s open attacking me, the last thing I want is for it to suck if it’s the first card played in a turn.

Some lists run three of them, some lists run zero. This list runs one. It has two bodies so it’s a good target to be sacrificed, and with the Vile Feasts, leveling Elise becomes a significant possibility especially if you draw Elise’s Crawling Sensation.

Another chump with an upside. This one’s upside requires extra mana to use, though. In a slower variant of this style that’s fine, but in this version turns 1-3 are premium and we are already extremely strapped for mana on those turns, so I prefer a spiderling on board to a cheap last breath follower in hand.

Some people don’t run this card. If you look at my “Plan A” section, you can understand that I think this is totally crazy and that it disables like half of your good aggro openings. Easy 3-of.

This card has convinced me of its place as a second finisher. You almost always have a wider board than your opponents, and you almost always want to push damage. Battle Rage lets you convert unblocked units into big damage. Like They Who Endure, it gets countered by Hush, but that’s one less Hush they have at their disposal. Some people would say that this card is a “flex slot” but I think it’s just a “flex”. Ha ha.

This is a higher-end guy you can run. It’s great value, two bodies, and it can be very strong if you level up Kalista and then summon it over and over again. But it’s worse if you run Battle Rage because it needs SI allegiance, and it’s also a card that gets better the more of it you run. I am not sure about this card.

This card can let you duplicate your They Who Endure for three spell mana on the turn you play it. That can turn lost games into won games if you need the extra damage, but it’s generally worse than Atrocity.

You’ve never heard of this card and that’s cause it’s probably bad. It’s a 1-cost burst spell that gives your next summoned unit +1/+0 and spellshield. Hush, Vengeance, and other bullshit can wreck your They Who Endure with one card, but this wrecks those cards with one card. Useless in most matchups and outside of the lategame, but if you’re wading through an ocean of Targon (sometimes the ladder be like that), then you can tech this in to rub it in their face. But if you’re in an ocean of Targon you should probably be playing another deck. Also can work as a nightfall enabler.